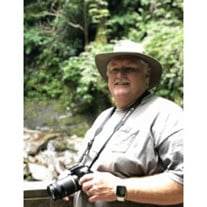 Reverend Dennis Jarrard, 67, of Freeport went to his Heavenly Home on Friday May 14, 2021. While his life and impact are far too great to fit in a few paragraphs we will do our best. Dennis was born on May 12, 1954 to the late Edna and Leroy Jarrard in Fort Benning, GA. He grew up in Moline, Illinois and moved to Western North Carolina to study Forestry and Wildlife Management. While there, he developed a deep love of the Smoky Mountains and met his wife, Donna. Dennis worked for the Illinois Department of Natural Resources for a number of years and was always teaching others about nature. A simple walk with him always resulted in learning the Latin names for trees, which plants could cure a toothache, or what leaf you could use to take the sting out of a bug bite. Dennis and Donna moved to New Mexico where they served as missionaries on the Navajo Nation at Hogan Nizhoni Church of God for 8 years. Even after returning to Illinois in 1995, Dennis continued to support the mission field by leading multiple church groups on service projects to the region. He leaves behind many friends who became family in the Navajo Nation and on the mission field. Dennis, Donna, and their two young children moved to Freeport where Dennis became the Pastor of Laurel Street Community Church. Dennis faithfully served the church for 26 years. He loved spending time with his church family. Some of his favorite memories were potlucks and the annual church hog roast. In addition to leading Laurel Street Church, Dennis was the Chaplain for the Freeport Police Department for 12 years. He also worked in the Freeport community, offering help wherever and whenever he could. At the end of every summer, Jarrard would gather church members, friends, and family to pick sweet corn and hand it out for free to anyone in Freeport who wanted it. Pastor Jarrard is remembered for his bright smile, bear hugs, devotion to his family, and sense of humor. He always found a way to bring light and laughter to any situation. Dennis is preceded in death by his daughter, Dyana Jarrard and his parents. He is survived by his wife, Donna, son Dustin, daughter, Dana Jarrard-Lameyer, son-in-law, John Lameyer, and one grandchild due this Fall. As well as his pride and joy, his German Shepherd, Mika. He is also survived by his brother David (Patty) Jarrard of Richmond, VA and sister Marceia (Ken) Duhm of Moline, IL along with numerous nieces, nephews, and great-nieces and great-nephews. A visitation will be held from 3pm to 7pm on Friday May 21 at Burke-Tubbs Funeral Home in Freeport. The Celebration of Life will be held Saturday May 22 at 1pm at Zion Church in Freeport; Reverends Travis Boden and Steve Rios will officiate. Burial will follow at Oakland Cemetery in Freeport. A memorial has been established for Laurel Street Community Church in Dennis' name.

Reverend Dennis Jarrard, 67, of Freeport went to his Heavenly Home on Friday May 14, 2021. While his life and impact are far too great to fit in a few paragraphs we will do our best. Dennis was born on May 12, 1954 to the late Edna and Leroy... View Obituary & Service Information

The family of Rev. Dennis Lee Jarrard created this Life Tributes page to make it easy to share your memories.

Reverend Dennis Jarrard, 67, of Freeport went to his Heavenly...

Send flowers to the Jarrard family.