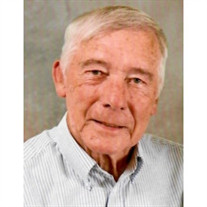 Richard K. DeVries of Forreston, IL. passed away on April 19, 2021 at Serenity Hospice & Home in Oregon Il, following complications of Parkinson's disease which he had for 22 years. Richard was the son of Martin & Elvera (Abels) DeVries. He married his high school sweetheart, Evelyn (Ratmeyer) in 1961. After High School he enlisted in the US Navy and served 5 years, including time on the Nuclear Submarine, the USS Shark. After leaving the Navy, he learned to fly and in 1966 was hired by United Airlines, where he had a career of 32 ½ years. During this time he was also involved with farming, The Gideons International, the local school board and his church. After retiring from United he and his wife did volunteer work with various mission organizations, traveling to different locations in their motor home, as well as overseas. He is survived by his wife of 59 years, son Steve and wife Anne of Lexington, KY and daughter Annette and her husband Scott McManigle of Middletown, VA. 8 grandchildren; Daniel (Naomi) McManigle of Middletown, VA., Joel (Rachel) McManigle of Thailand, Seth (Jaime) McManigle of Stephens City, VA., Bethany McManigle of Middletown, VA., Caleb DeVries of Ft. Campbell, KY., Abigail DeVries of Orange, MA., Japheth (Morgan) DeVries of Ft. Jackson, SC., and Emily DeVries (Saam Pourakbarian) of Lexington, KY. Also 9 great grandchildren and his sister Doris and husband Ed Holaday of Forreston. Rich was preceded in death by his parents and his sister and brother in-law Barbara and Jerry Zuspann. A family service will be held, with burial at Chapel Hill Memorial Gardens. In lieu of flowers memorials may be made to The Gideons International or Serenity Hospice and Home. Please sign Richard's guestbook and share a story at www.burketubbs.com

Richard K. DeVries of Forreston, IL. passed away on April 19, 2021 at Serenity Hospice & Home in Oregon Il, following complications of Parkinson's disease which he had for 22 years. Richard was the son of Martin & Elvera (Abels) DeVries. He... View Obituary & Service Information

The family of Richard Keith DeVries created this Life Tributes page to make it easy to share your memories.

Richard K. DeVries of Forreston, IL. passed away on April 19,...

Send flowers to the DeVries family.