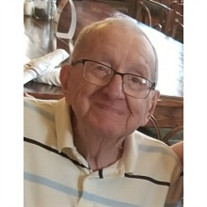 Richard David "Dick" Dinneen, 87, of Freeport, IL passed away March 26, 2020 at home surrounded by his loved ones. Dick was born July 13, 1932 in Albany, NY to the late John and Mary Jane (Carmello) Dinneen. Dick and Marie were married on May 28, 1955 at St. Stephen's Catholic Church, Des Plaines, IL. He graduated from Cathedral Academy in Albany, NY and attended Indiana State Teachers College. He entered the U.S. Air Force in 1951 during the Korean War as a Radio Technician on the B-36 Aircraft. Dick served in England, Greenland, Alaska, and several USAF Bases in the United States. Dick had a successful career in the electronic sales field. He was an Ordained Permanent Deacon on May 21, 1977 and served for 20 years at St. James Catholic Church in Arlington Heights, IL. Dick and Marie semi-retired to Freeport in 1999 where he continued to serve as a Permanent Deacon at St. Thomas Aquinas Parish. During his 40 years as a Permanent Deacon, he served on the Marriage Tribunal, was active in RCIA, performed many Baptisms and 1st Holy Communions, witnessed many marriages, and assisted at numerous Confirmations. Dick found great joy in administering or assisting at many of his grandchildren's and great-grandchildren's Baptisms, 1st Holy Communions, Confirmations and weddings.As hospital chaplain in Arlington Heights, Dick helped many families through the grieving process with prayers, counsel, and support. Dick had a great sense of humor, loved the Yankees, Chicago Bears, Chicago Blackhawks, and a good glass of wine! He enjoyed sharing his incredible knowledge of the sports world, baseball in particular. Dick is survived by his wife of 65 years, Marie; daughter Mary of Scottsdale, AZ; daughter Peggy of McHenry, IL; son Rich (Janine) of South Elgin; son John (Linda) of Elgin; 9 grandchildren and 13 great-grandchildren. Cremation rites have been accorded and a celebration of life will take place at a later date. In lieu of flowers memorials may be made to St. Joseph's Indian School at www.stjo.org. Condolences may be shared at www.burketubbs.com

Richard David "Dick" Dinneen, 87, of Freeport, IL passed away March 26, 2020 at home surrounded by his loved ones. Dick was born July 13, 1932 in Albany, NY to the late John and Mary Jane (Carmello) Dinneen. Dick and Marie were married on May... View Obituary & Service Information

The family of Richard David Dinneen created this Life Tributes page to make it easy to share your memories.

Send flowers to the Dinneen family.