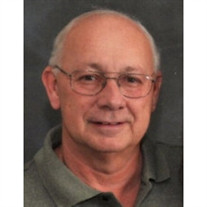 "There are some who bring a light so great to the world that even after they have gone the light remains." - unknown Richard "Rich" Louis Loberg, age 69, of Pearl City, was called home by his Lord and Savior on April 12, 2018 after his courageous battle with Lymphoma. Born on October 12, 1948 to George and Valerie (Panks) Loberg, he attended Stockton High School and worked at various farms, Milwaukee Railroad, Micro Switch, and Coca-Cola. In his spare time, he was often found tearing apart his car, pursuing his passion of a better engine and a faster car. This self-taught skill would eventually mold him into an excellent mechanic. It was also during this time that he became acquainted with and won over his soon-to-be-wife. Despite his strong work ethic and skills with engines, all would be put on hold when he was called to serve our country in the U.S. Army. Soon after enlisting, he married Connie Kampmeier, whom Rich called "hon", on September 25, 1968. Rich completed Basic at Ft. Leonard Wood, Missouri and thereafter he and Connie made their home at Ft. Riley, Kansas. While they often lived on meager meals, they made the best of things and still managed to live life to the fullest through relationships made and adventures experienced. One such example would be a motorcycle drag race that Rich randomly decided to enter on his street bike (against much superior racing bikes, mind you), resulting in the task of hauling a large, first-place trophy home between the two of them, on the motorcycle. After being stationed in Kansas, Rich was called to serve in Vietnam, a move that resulted in an 11-month separation from his family. Upon returning home, he was then stationed in Ft. Ord, California, during which time he earned his GED and once again took in life with Connie. Whether it was in spending time with friends or taking trips to the mountains, they were just grateful to be together. Following 3 years of military service, Rich once again picked up his passion for engines and vehicles through jobs at Montgomery Ward in the automotive department followed by 16 years at Freeport Yamaha, where his knowledge and dedication earned him the title of the owner's "main man". Through his experience and knowledge, Rich then decided to go into business for himself and created Loberg Excavating, Inc. in 1986. Not only did Rich thoroughly enjoy running the daily operations of the business, his legacy soon developed through his work ethic, desire for excellence and relationships that he made with virtually everyone along the way. Rich was not all work and no play, however. He knew how to savor life, to live in the moment. And in most of those moments, he wanted to savor life with those that he loved. He and Connie enjoyed years of traveling adventures, many of which included close friends and family. He took interest in outdoor activities such as camping and fishing in his pond, along with boating and jet skiing, spending many summers on the Mississippi with family and friends. He was an expert Grill Master, often inviting others over and serving up his famous grilled chicken, asparagus and fought-over sauteed green beans. Technology continually sparked his interest - anything from drones, RC trucks, cell phones to computers - he always found a way to share his expertise in the area. Lastly, he was a photographer; once again sharing his gift by taking family photos at the annual Loberg Christmas and passing on his wisdom in photography to those eager to learn. And true to his legacy, Rich lived to love and provide for those close to his heart. He didn't blink to help someone in need; to teach a skill; or to bless someone. Even if you weren't family by blood, he made you feel like family. His life motto, "Go Big or Go Home" and his trend-setting qualities were demonstrated through his quest for excellence and leadership ability. Rich was a member of the Freeport Area Chamber of Commerce; Crossroads Community Church; Eagles Club and former member of the Owls' Club. He also belonged to the Associated Builders & Contractors, later serving on the board of directors and holding positions of Vice Chairman in 2007 and Chairman in 2008. He also received the VP Builder's Best of Category award; Yamaha Spark Plug Award and the Beam Level ABC Award, which included yet another memorable traveling adventure as Rich and Connie embarked to Hawaii to accept his award. Rich is survived by his wife, Connie; daughter, Lori (Darrell) Stukenberg of German Valley; son, David (Andrea) Loberg of Belvidere; son, Scott (Angela) Loberg of Shannon; sisters, Judy Wright of Mountain Home, Arkansas and Linda (Daryl) Ehredt of Juda, WI; mother-in-law, LaVerne Kampmeier of Lena; sister-in-law and brother-in-law, Cindy & Gary Cross of Winslow; sister-in-law, Shirley Kampmeier of Freeport; grandchildren, Jenna (Dre Tensley) of Freeport; Dylan Stukenberg of Forreston; Cassidy and Ceanna Loberg of Shannon; Mia Loberg and a granddaughter due in July of Belvidere; two great-grandchildren Aiden and Braylon and many nieces and nephews, and best friends, Wayne and Cheryl Schofield. Also known as "Uncle Rich", he will be missed by the many children of the Schofield, Schneider and Dietz families. He was preceded in death by his parents, George and Valerie Loberg; an infant sister; brother-in-law, Larry Wright; father-in-law, Eugene Kampmeier and brother-in-law, Steven Kampmeier. Visitation will be from 3-7 pm on Friday, April 20 at Crossroads Community Church in Freeport, IL. A celebration of life service will be held at 10 am on Saturday, April 21 at the church. A brief visitation will take place prior to the service. In lieu of flowers, a memorial has been established in his name.

"There are some who bring a light so great to the world that even after they have gone the light remains." - unknown Richard "Rich" Louis Loberg, age 69, of Pearl City, was called home by his Lord and Savior on April 12, 2018 after his courageous... View Obituary & Service Information

The family of Richard L. Loberg created this Life Tributes page to make it easy to share your memories.

&quot;There are some who bring a light so great to the world that...

Send flowers to the Loberg family.