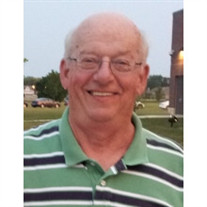 Robert "Bob" H. Behrens, 71, of Morton, IL passed away on Tuesday, February 25, 2020 following a courageous battle with lung cancer. He passed away at Bro-Menn Hospital in Bloomington/Normal IL with family surrounding him. Celebration of his life will be held at Burke-Tubbs Funeral Home in Freeport, IL on Saturday, February 29, 2020. Visitation will be held from 12:00 noon until 2:00pm with a funeral service immediately following from 2:00 -2:45pm. Burial will be at City Cemetery in Freeport following the service. Online condolences may be made at www.burketubbs.com. Bob was born on June 4, 1948 in Platteville, WI, the son of Edward and Helen (Masbruch) Behrens. He graduated from Platteville High School in 1966. He married Nancy Martens on December 16, 1967 at Peace Lutheran Church in Platteville. He served admirably in the U.S. Army from 1967-1969 with service in Korea. Bob worked in retail sales and management from 1969 until 1980 living in Wisconsin, Iowa, Illinois, and Kentucky. He and Nancy decided in 1980 to move back "home" to Platteville with their three boys. Bob then began a successful career with Woodward Communications taking management positions in Platteville, Freeport, and eventually East Peoria, IL until his retirement in 2010. His legacy is one of being a tremendous family man as he adored his wife, children, and grandchildren. He always enjoyed time with family, no matter the occasion, as that was most important to him. Heartbroken after the passing of Nancy in 1999, he emphasized family time with his sons and grandchildren even more. His leadership in youth baseball and basketball programs in Platteville and Freeport helped impact the lives of thousands of young athletes. He was more generous to family and communities than people will ever know. Bob was also a passionate fan of Wisconsin sports and his Green Bay Packers. Bob is survived by three sons, Rob (Mercy) Behrens of Bloomington, IL and their daughters Julia and Jessica; Eric "Rick" Behrens of Peru, IL and his son Zane; Kevin (Lori) Behrens and their children Braden and Ella. Bob is also survived by 3 sisters, Pat Behrens of Hazel Green, WI; Donna (Don) Reilly of Hazel Green; Helene Ruege of Green Bay; as well as many cousins, nieces, and nephews. He was preceded in death by his wife of 32 years, Nancy; his parents Edward and Helen, brothers Gerald and Eugene (Delores), and sisters Beta (John) Burkle and Dorelle (Raymond) Steele; his mother and father in law, Helen and Donald Martens; and his grandchildren Zachary, Chase, Claire, and Owen Behrens. The family would like to send special thanks to the staff at Heritage Nursing Home in Normal, IL for the care and compassion they provided over the past three months and to the hospice team at Bro-Menn Hospital in Bloomington/Normal IL.

Robert "Bob" H. Behrens, 71, of Morton, IL passed away on Tuesday, February 25, 2020 following a courageous battle with lung cancer. He passed away at Bro-Menn Hospital in Bloomington/Normal IL with family surrounding him. Celebration of his... View Obituary & Service Information

The family of Robert H. Behrens created this Life Tributes page to make it easy to share your memories.

Send flowers to the Behrens family.