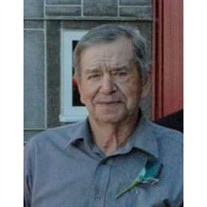 Robert "Bob" Melvin Mielke, 88, of Pecatonica, died Sunday, May 16, 2021 in his home surrounded by his family. Bob was born June 26, 1932 in Savanna, the son of Ernest and Hazel (Hicks) Mielke. He attended Savanna schools throughout his childhood. Bob proudly served his country in the U. S. Army from 1952-1954 during the Korean conflict, he was the recipient of a Purple Heart. On January 20, 1957 he married Rose Hastings. Rose passed away November 13, 2015. Bob was a lifelong farmer. He also worked at Dean's Food before retiring in 1999. He was a member of Winneshiek Evangelical Free Church. Some of his greatest joys were watching his grandchildren and great-grandchildren grow up. Surviving are his children, Sharon (Kelvin) Krise of Pecatonica, Susan (Thomas) Reilly of Coal Valley, Gary (Cindi) Mielke of Ridott, Gerald (Jessie Allen) Mielke of Ridott, and Theresa (Mark) Klenz of Rock City; 15 grandchildren, over 30 great-grandchildren; sister, Evelyn (Richard) Schneider of Mt. Carroll and Phyllis (Wilfred) Smithson of Bellevue, Iowa; and sister-in-law Ruth Mielke of San Antonio, TX. Bob was preceded in death by his parents, wife, brothers, Edward (Isabelle) Mielke, LaVerne (Emily) Mielke, Virgil Mielke; sister, Margaret (Palmer) Dauphin, Lepha (Allen) Yeager, Francis Clark, Irma (Raymond) Rosenwald, Olga (Lloyd) Haas, Marilyn (Leon) DePue; and grandson, Daniel Mielke; and two great-grandchildren. Funeral services will be 11:00 A.M. Thursday May 20, 2021 at Burke-Tubbs Funeral Home in Freeport. A visitation will be held from 9:00 A.M. until the time of service. Burial will be in Highland Cemetery in Pearl City. In lieu of flowers a memorial has been established in his memory. Please sign Bob's guestbook and share a remembrance at www.burketubbs.com

Robert "Bob" Melvin Mielke, 88, of Pecatonica, died Sunday, May 16, 2021 in his home surrounded by his family. Bob was born June 26, 1932 in Savanna, the son of Ernest and Hazel (Hicks) Mielke. He attended Savanna schools throughout his childhood.... View Obituary & Service Information

The family of Robert 'Bob" Melvin Mielke created this Life Tributes page to make it easy to share your memories.

Send flowers to the Mielke family.