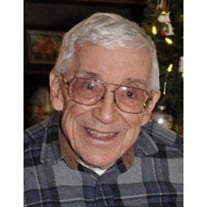 Robert (Bob) Ernest Worrall, 80, of Pearl City, IL passed away from COVID-19 on October 22, 2020 at UW Health University Hospital in Madison, Wisconsin. Bob was born in Newmarket, Ontario, Canada on May 15, 1940 to Reverend Ernest William George and Ethel (Gillings) Worrall. In 1948 Bob's parents moved the family to Camden, New York where his father was assigned to Trinity Episcopal Church. In 1952 the family moved to Waterloo, IA where his dad was assigned St. Mark's Episcopal Church. In 1954 Bob, along with his parents, received their United States Citizenship. Bob graduated from West Waterloo High School and Iowa State Teacher's College (University of Northern Iowa) in Cedar Falls. Following graduation Bob taught two years in Cleveland, OH and seventeen years in Pearl City, IL. After he left teaching, he worked in insurance and car sales. Bob married Faith (Wubbena) Worrall on June 2, 1973 in the Forreston Reformed Church. They were married for 47 years. They had two sons, Patrick and Kevin. Bob was a Boy Scout Leader for Pearl City Troop 27 and, later, became the Religious Emphasis Chairman for the Wetessa District of the Blackhawk Area Council with the focus of helping scouts obtain their affiliated religious awards. While active in the role, Bob was awarded the Raccoon Award, Bridge Builders Award and District Award of Merit. He was an active member of Immanuel Lutheran Church in Freeport, IL. Within the church, he was a member of Young at Heart, the choir and was an usher and greeter. Bob was well-known in the area for his love of trains. His primary hobby was his model railroad collection. Following his retirement, Bob enjoyed going to regional model railroad shows and "talking shop" with other collectors. During his lifetime, Bob enjoyed keeping in touch with his many cousins resulting in travels to Canada, England and Ireland. One of the more remarkable moments was traveling to England with Faith aboard the Queen Elizabeth II (QE2) ocean liner. Bob is survived by his wife, Faith; children Patrick (Carrie), grandson Rory; Kevin (Alissa), granddaughter Keira; brother-in-law and sister-in-law Lloyd and Barb Wubbena; sister-in-law Janet Worrall, and nieces and nephews. He was preceded in death by his parents, his brother, Arthur Worrall, an infant brother, Faith's parents, Albert and Ruth Wubbena, and brother-in-law, David Wubbena. The funeral will be held on May 15, 2021 at Immanuel Lutheran Church with immediate family only due to COVID-19. Burial will be in White Oak Cemetery, west of Forreston, IL. A memorial has been established in his name for Immanuel Lutheran Church.

The family of Robert (Bob) Ernest Worrall created this Life Tributes page to make it easy to share your memories.

Send flowers to the Worrall family.