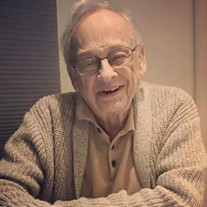 Not sure what to send?

Bob (Robert P. Eckert III) was born midsummer 1929 to Robert P. Eckert Jr. and Olga F. Eckert. Bob grew up in Freeport. He was the grandson of the senior Robert Eckert. Bob's grade school was St. Thomas Aquinas Catholic School. His high school was Freeport High, where he graduated in 1947, and went on to Georgetown University, graduating with a degree in Liberal Arts & Physics in 1951. He was an enlisted Electronics Technician in the U. S. Navy before achieving Officer rank in 1953. He then served as Technical Officer of guided Missile Unit Number 11 in Chincoteague, Virginia testing early U.S. adaptations of Japanese warfare technology (missile-launched torpedoes). In 1953, he married Jacqueline (Jackie) Gill of Athens, Ontario, Canada. In 1957 he left the Navy and he and Jackie lived in North Springfield, Virginia. His first civilian employment was with the Operations Research office of Johns Hopkins University, later with engineering consulting businesses concerned with radar coverage, then radio wave coverage of various private and public safety systems and most recently TV broadcast stations. In 1980 he joined the Federal Communications Commission analyzing coverage and interference matters of radio and TV. Finally it was in the 1990's when he was largely and solely responsible for the national layout of HDTV channel assignments. Bob's wife, Jackie died in 1959, and he married Constance P. Connolly of Port Chester, New York. Constance and Bob raised 4 children in Bethesda, Maryland. Bob is survived by those 4 children: Aquila Stanley of Greenbank, Washington; Ann Hessenauer of Pensacola, Florida; Amanda Paoletti of Nevada City, California and David Eckert of Orinda, California. Additional survivors are grandchildren Matthew Graff, Adam Paoletti, Nicolo Paoletti, Sean Eckert, Julian Eckert and great grandchildren Blake & Olivia Graff. After the death of his wife Constance Bob married Janet Sheets of Bethesda, Maryland. Later, when he retired in 2003, he and Janet moved to Freeport. Bob was a supporter of Freeport institutions, a golfer, a member of the Freeport Club, a regular at the Elks Lodge, and frequently entertained at his home on West Pearl City Road. A memorial mass will be held 10:30 A.M. Saturday July 9, 2022 at St. Thomas Aquinas Church with Fr. David Bauvais officiating. Visitation will be from 9:30 A.M. until the time of service at the church. Burial of cremains will be in Calvary Cemetery, Freeport, IL.

The family of Robert P. Eckert created this Life Tributes page to make it easy to share your memories.