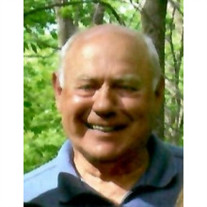 Robert E. Quittschreiber, 87, of Freeport, passed away Sunday January 3, 2021 at the Lena Living Center. Robert was born November 5, 1933 in Arthur, North Dakota, the son of Edward and Helen (Burmeister) Quittschreiber. Robert married Marilyn Piefer on March 27, 1955. Marilyn passed away March 27,1972. Robert then married Patricia Voss on December 29, 1989. Mr. Quittschreiber proudly served his country in the U.S. Army. He was a police officer in Freeport for many years. He also worked for the Green County Sheriff's Department. Following his retirement from law enforcement, Robert owned and operated Quittschreiber Construction with his son, Steve. He was a member of Our Redeemer Lutheran Church. He enjoyed spending time at the lake with all of his family, being outdoors, fishing, hunting, and bowling. He was an avid Green Bay Packer fan. Robert was a Cub Scout Leader and coached Little League for 10 years. Surviving are his wife, Patricia Quittschreiber of Freeport; two sons, Steven Quittschreiber of Freeport and Robert G. "Rob" Quittschreiber of Loves Park; two daughters, Lucinda "Cindy" (Stan) Kasper of Freeport and LuAnn (Stephen) Hasenyager of Freeport; sister, Jane Lindenman of Freeport; ten grandchildren and two great-grandchildren. Robert was preceded in death by his parents, first wife, one brother, and three sisters. Visitation will be Friday January 8, 2021 from 12:00 p.m. - 2:00 p.m. at Burke Tubbs Funeral Home. Private family funeral services will be held. Burial will be in Chapel Hill Memorial Gardens. A memorial has been established in his memory. Please sign Mr. Quittschreiber's guestbook and share a remembrance at www.burketubbs.com

The family of Robert E. Quittschreiber created this Life Tributes page to make it easy to share your memories.

Send flowers to the Quittschreiber family.