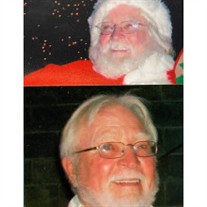 Rodney P. Quies Sr., 80, of Freeport, IL passed away Saturday November 21, 2020 at St. Mary's Hospital in Madison, WI. He was born November 15, 1940 in Freeport, IL the son of Robert K. and Cleone (Thoman) Quies. On October 11, 1959 he married Patricia Orlandi at Grace Evangelical Church in Rockford, IL. Rodney enjoyed karaoke, building all types of crafts from scratch, farming, providing for the community, and spending time with his kids, grandkids and great-grandkids. He found great joy in being the Santa for the community for over 20 years. He is survived by his son Randy Quies of Winslow, IL; daughter Penny Bose of Freeport; friend that was considered a son Craig Van Drew; sisters Tudy Schmerse of Rockford, IL and Vicki Grondzki of Rockford, IL; brother-in-law Art (Judy) Orlandi of North Barrington, IL; grandchildren Steve "Wink"(Stephanie) Pirrello, Cortney (Tim) Kaiser, Derek Quies and Ashley Wire; nine great-grandchildren; and many nieces and nephews. Preceding Rodney in death is his parents, brother Robert, sisters Patsy and Lucille, son Rodney Jr. and daughter Paula Moring. Cremation rites have been accorded. A celebration of life will be held at a later date. A memorial has been established in his memory and can be sent to Pat Quies at 2907 West Richland Road, Freeport, IL 61032

The family of Rodney P. Quies Sr. created this Life Tributes page to make it easy to share your memories.