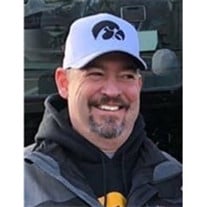 Ryan L. Herbig, 55, of Freeport passed away July 4, 2020. He was born April 13, 1965 in Freeport, IL to Lester and Sharon (Rudy) Herbig. On October 24, 1998 he married Christina Ritter in Freeport, IL. Ryan was a 1983 graduate of Freeport High School where he excelled in football; he also wrestled, and ran track for the Pretzels. He went on to play Football for Rock Valley College for one more year and then transferred to the University of Dubuque to continue to play football with many accolades in local area newspaper. He graduated in 1988 from the University of Dubuque with a Sociology degree. Shortly after college, Ryan applied to become a police officer for the Rockford Police Department, only to be denied for his known bad eyesight. Ryan then studied to become a real estate appraiser; where he then became a Certified Appraiser for John Hill & Associates later to become Midwest Appraisal for 26 years. Ryan continued his love for football with the Freeport Junior Tackle program for 20 years, coaching the Vikings for many of those years. Past athletes still refer to him as "Coach". Ryan loved to play softball, especially with the Freeport Merchants. For several years he would travel to Portage, WI, playing in tournaments and making memories and friends that would last a lifetime. Ryan also enjoyed running chain gang every Friday night for the Freeport Pretzels; he always called it the best seat in the house. Ryan enjoyed long days deer hunting with some of his best friends, he was very proud of some of his scores and was even more proud for providing food for his family. Ryan still shared his love for the game of pool side hustling every chance he could, claiming he couldn't see that well anymore but still managing to wipe the table. He is survived by his loving wife Christina Herbig; son Michael Herbig; daughter Andrea Herbig; his parents Les and Dorothy Herbig; Sharon and Alan VanRaalte; sister Kelly (Charlie) Craft; brother Chris (Stephanie Glover) Herbig; Step-Sisters Michelle Gambuto, Kristine (Craig) Hester -VanRaalte; Lori VanRaalte; Donna Stejskal, and Step-brother Dean Stejskal; sister-in-law Kim (Floyd) Sutton; brother-in-law Jeff (Stephanie) Ritter; mother-in-law Bonnie Ritter; several nieces and nephews; and several great-nieces and great- nephews. He is preceded in death by his paternal grandparents Louis and Winnifred Herbig; maternal grandparents Elwyn and Marian Rudy; father-in-law George Ritter; His Aunt Sandy Manns: Step-Grandparents: Evelyn VanRaalte; Ed and Stella Wegrzyn and step-sister Tina Hermann. A visitation will be held on Thursday, July 9, 2020 from 10:00 A.M.-12:00 P.M. at Burke-Tubbs Funeral Home. A private family service will be held. In lieu of flowers a memorial has been established in Ryan's memory.

The family of Ryan L. Herbig created this Life Tributes page to make it easy to share your memories.

Send flowers to the Herbig family.