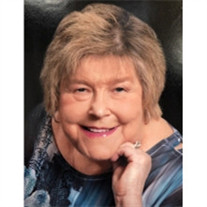 Sally L. Gundry, of Freeport, passed away peacefully at Freeport Memorial Hospital on Saturday, November 2nd, 2019, with her husband and daughters by her side. Born in Freeport on May 27, 1942, Sally was the daughter of Carl and Mary (Johnson) Arola. Sally graduated from Freeport High School in 1960. She and Jon Gundry were married on June 22, 1962 in Warren, Illinois. They lived in Warren for 6 years, then moved to Rockford before settling in Freeport in 1973 to raise their family. Sally worked as a medical transcriptionist at FHN, but her most notable role was that of wife and mom. She devoted herself to supporting and caring for her husband and three daughters, and made the family home a place to be proud of. She and Jon entertained family and friends on holidays, and numerous guests at game dinners and open houses. Sally also volunteered for a number of organizations through the years, including Amity Society of Freeport, Faith United Methodist Church, her daughter's schools as they were growing up, and Freeport Garden Club. Sally loved spending time in the Upper Peninsula of Michigan, at the family cabin, The Roost. She enjoyed boat rides on the lake and spending time with family and friends. She was also quite the hostess at the lake, inviting families to vacation with them, hosting summer olympics, chili competitions and many other gatherings. She enjoyed spending time with her special Aunts, Jane Decock and Kay Arola. Sally is survived by her husband Jon, daughters Amy Miller of West Dundee, IL, Heather (Aaron) Warner of Coralville, IA, and Heidi (Martin) Ottilie of Dekalb, IL; and grandchildren Austin Miller, Olivia Ottilie, and Isaac and Emily Warner. Other survivors include brothers Richard (Mary) Arola of Winfield, IL and K. Michael Arola of Freeport; sister Cynthia Arola of Freeport; and brother-in-law Craig (Jane) Gundry of Escanaba, MI, and numerous nieces and nephews. She will be lovingly remembered by many friends. She is preceded in death by her parents, Carl and Mary, her father and mother-in-law Marvin and Eileen Gundry and her son-in-law, Ken Miller. Services will be held at 1 p.m. Saturday, November 16 2019 at Faith United Methodist Church 1440 S. Walnut Ave., Freeport. Sally's family will receive friends at the church from 11:00 a.m. until the time of the service. In lieu of flowers, memorial donations may be made to the National Diabetes Research Foundation. Please sign Sally's guestbook and share a story at www.burketubbs.com

Sally L. Gundry, of Freeport, passed away peacefully at Freeport Memorial Hospital on Saturday, November 2nd, 2019, with her husband and daughters by her side. Born in Freeport on May 27, 1942, Sally was the daughter of Carl and Mary (Johnson)... View Obituary & Service Information

The family of Sally L. Gundry created this Life Tributes page to make it easy to share your memories.

Sally L. Gundry, of Freeport, passed away peacefully at Freeport...

Send flowers to the Gundry family.