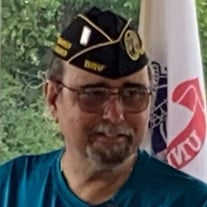 Scott Emmert Jude Haugh, 66, of Freeport, went to be with the Lord Jesus Christ on Sunday October 3, 2021. Scott was surrounded by his loving wife, Louann Coates-Haugh and his beloved four-legged daughter, Sadie. Scott was born on July 27, 1955, in Naha, Okinawa, Japan, the son of Clarence Werner and Marilyn (Silva) Haugh. Scott is survived by his wife, Louann Coates-Haugh; his four-legged daughter, Sadie; daughter, Elizabeth Lynn Haugh Torres; three grandchildren, Landon Dubson, Matthew, and Rowan Haugh of Taylorville, Illinois; brothers, Bruce (Twyla) Haugh and Brian (Brenda) Haugh, both of Freeport, and James Deacon of Lincoln, Maine; also surviving are many nieces and nephews. Scott was a simple man who had few needs, and those were his God, family, and friends. Growing up he was a military child who traveled the world with his family. He graduated from Forreston High School in 1974. He worked several jobs prior to enlisting in the United States Army in 1990. Scott was a combat veteran of Desert Storm and the Gulf War. He was in the field artillery but was then medically retired in 1997. In his life, for the past 20 years he worked for the State of Illinois as a Disabled Veterans Employment Representative, and then as a local Veteran’s Employment Representative. During his time, he received numerous awards for excellent service. Scott created several websites, vets4veteran.com, and servicesdirect.org. He served on the executive board for the Freeport Public Library, founding father and President of the Veterans Transitional Center INC., A 502C3. He was an Employer Support of the Guard and Reserve (ESGR) Liaison for 10 years and was a life member and a Past Commander of the Freeport VFW Post 998, Commander of the Disabled American Veterans Blackhawk Life Chapter 29 for 18 years until June of this past year, Past Commander of the AMVETS Post 32. He was a paid up for life (PUFL) of the American Legion and a Past District Commander of the American Legion. He was a member of the Knights of Columbus Council 653 where he was the Grand Knight and was also a 4th Degree Knight. Scott was very passionate about helping the Veteran Community, his church and his Lord God. He was preceded in death by his parents; maternal and paternal grandparents; and beloved cocker spaniel, Jenna. Funeral Mass will be 10:30 a.m. Saturday October 9, 2021, at St. Joseph Catholic Church. Fr. Timothy Barr will officiate. Rosary service 4:00 p.m. Friday October 8, 2021, at Burke Tubbs Funeral Home, Freeport. Following the Rosary, Visitation will go until 7:00 p.m. Burial will be in Chapel Hill Memorial Gardens. A memorial has been established in Scott’s memory.

Scott Emmert Jude Haugh, 66, of Freeport, went to be with the Lord Jesus Christ on Sunday October 3, 2021. Scott was surrounded by his loving wife, Louann Coates-Haugh and his beloved four-legged daughter, Sadie. Scott was born on July 27, 1955,... View Obituary & Service Information

The family of Scott Emmert Haugh created this Life Tributes page to make it easy to share your memories.

Scott Emmert Jude Haugh, 66, of Freeport, went to be with the...

Send flowers to the Haugh family.