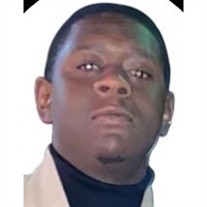 Tyrie Q. Allen, 24, left this earthly life on January 28th, 2021. Tyrie was the son of Chandra Pearson and Tyrane Allen, born October 22, 1996. At an early age, Tyrie professed his hope in Christ and was baptized at the Friendship Missionary Baptist Church under Rev. Ricky Stidmon. Tyrie was a 2016 graduate of Proviso East High School. Tyrie worked for Willowglen Academy as a Direct Service Provider from 2018-2020. He had a passion to help those young people that could not always help themselves. Many times he was called in on his day off because one of the residents would not eat until they saw him. He became a calming force for many of them. Most recently, Tyrie was employed at Berners Food and Beverage; there, he was a palletizer in shipping. Tyrie's biggest love was the love he had for his family. He enjoyed all of the family trips, picnics, and family love. Tyrie was one of the first grandchildren to come back to reside with his grandmother after his grandfather passed. Tyrie could also be found babysitting his nieces and nephews; they held a special place in his heart and had him wrapped around their fingers. Tyrie's respect, kindness came through so strong to everyone around him. His contagious smile and his dimples reflected his love for life and the people he shared it with. Cherishing his memories are his mother, Chandra Pearson, his father, Tyrane (Rolanda) Allen; three brothers: Tyrell Allen, RaSean Allen, and his twin brother, Kyrie Allen, step-brothers: Orlando (Lanita) Winfrey, Kendrick Clark, Kendall Clark; step-sister: Lakida Winfrey; his maternal grandmother, Rhonda Pearson; special aunties, Mildred Allen, Debra Allen, Celestine Allen, Tabitha Edwards; and a host of nieces, nephews, loving uncles, cousins, and friends. Tyrie also leaves the shining light of his life, Morgan Owens. They shared a special bond for 6 years. Preceding him in death, his maternal grandfather, Cecil Pearson, paternal grandmother, Celeste Allen, his aunt, Cherry Burrell, aunt, Lizzie Allen, aunt, Ann Allen, cousins, Kaprice Griffin, Keontaye Cook, and Robbie Williams Jr. Services for Tyrie Allen will be held at St. Paul Missionary Baptist Church located at 607 E. Stepehnson Street. Service times are as follows: Saturday, February 6, 2021 Visitation: 10 A.M. - 12:00 P.M. Private Family Service: 12:00. Due to COVID protocols and limited space, the family asks that you respect and adhere to the times provided.

Tyrie Q. Allen, 24, left this earthly life on January 28th, 2021. Tyrie was the son of Chandra Pearson and Tyrane Allen, born October 22, 1996. At an early age, Tyrie professed his hope in Christ and was baptized at the Friendship Missionary... View Obituary & Service Information

The family of Tyrie D' Angelo Allen created this Life Tributes page to make it easy to share your memories.

Send flowers to the Allen family.