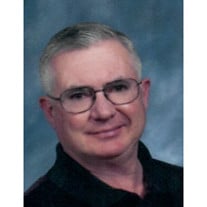 Virgil C. Kriens, 80, of Freeport, IL passed away August 12, 2020, at home with his family by his side, after a short illness of MDS/Leukemia. Virgil was born to Carl and Irene (Frey) Kriens on July, 9 1940 in Freeport. He attended Henny Grade School and graduated from Freeport High School in 1958. Virgil liked playing "Shoot the Marbles" with his grade school friends and frequently was the winner. Virgil's first job was working for Piggly Wiggle as a car port boy. From there he became cashier and assistant manager. He retired after forty-six and a half years from Sullivan Foods. Virgil was a gifted musician, he played piano, organ, and accordion. He played for the Zion Church, Salem Church, weddings, and funerals. If you could name the song, Virgil could play it. On June 27, 1965 he married the love of his life Dorothy Klinger. Together they raised two sons Mike (Audrey) Kriens of Elgin, IL and Craig (Tracey Brooks) of Freeport, IL. Virgil is also survived by his eight grandchildren Allison Kriens, Adam Kriens, Cortney Kriens, Gecia Kriens, Samantha Brooks, Jordan Brooks, Tyler Brooks and Sydney Brooks. Also surviving are Virgil's sister-in-law Barb (Tom) Suess. Virgil was preceded in death by his parents, Carl and Irene Kriens; father and mother-in-law, Ben and Martha Klinger; and brother-in-law, Jerry Klinger. Virgil was a sports lover, he loved going to all of son's and grandchildren's games. He loved going to all their school activities and never missed a game or event. Virgil also loved cleaning his cars. He was very particular how they looked. Virgil's favorite thing to do was to be on the open road on his Silver Anniversary Harley Davidson motorcycle. He was a member of the Kameraden Car Club. Funeral services will be 11:00 A.M. Tuesday August 18, 2020 at Zion Church with Rev. Gardy Cronk officiating. A visitation will be held from 4:00-7:00 P.M. Monday August 17, 2020 at Burke-Tubbs Funeral Home. Due to Covid restrictiions and guidelines facial masks will be required at the visitation and funeral service. Burial will be in Chapel Hill Memorial Gardens. A memorial has been established in Virgil's memory.

Virgil C. Kriens, 80, of Freeport, IL passed away August 12, 2020, at home with his family by his side, after a short illness of MDS/Leukemia. Virgil was born to Carl and Irene (Frey) Kriens on July, 9 1940 in Freeport. He attended Henny Grade... View Obituary & Service Information

The family of Virgil C. Kriens created this Life Tributes page to make it easy to share your memories.

Send flowers to the Kriens family.