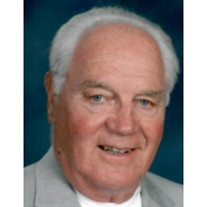 Our loving father, grandfather, brother, uncle, and friend, William (Bill) Joseph Pittz passed peacefully Jan. 24, 2020, surrounded by his loving wife and family. Bill was born July 26, 1933, raised on the family farm in Mineral Point, Wisc. His disciplined work ethic led him to obtain a degree in Industrial Arts and Mathematics, and pursue a successful career that lasted through his retirement last October. He was proud of his career accomplishments, but it was his family and friends that he cherished most. He worked hard and played hard. Winter weekends were spent ice skating, sledding and skiing with his six young daughters, giving his loving wife of 63 years respite. Summer days were spent at Rock Dam, where he taught many children the art of water skiing. He never missed a year to send Valentine wishes to his girls. Following in his own Dad's shoes, his grandkids could never leave the house without a game of "got you last" tag; surely to aggravate his daughters that wanted to get home. Those that knew him were touched by his kind heart, sparkling eyes, inviting smile, and hearty laugh. He was a loyal, lifetime friend and considered all of his friends, family. His passion for life was contagious. There is no doubt that in his final days, he was telling God he needed ten more years - as did his family and friends. Bill is survived by his wife Donna Bunbury Pittz, Daughters: Renee (Sam Pobjecky, Corey Pierce); Jean (Ron Daggett, Kyle and Brett Daggett); Kim (Jim Ward, Karly and Paige Sopcic); Sharon (Kirk Sinclair); Kelli Pittz (Christopher, Jessica and Kelsi Berlinghof); Kathy (Larry Welborn, Claire). He is also survived by his brothers: Clarence (Bonnie Pittz), Frank, Greg (Linda Pittz), and his sister Marge Ruth; as well as two great grandchildren and many nieces and nephews. Bill was preceded in death by his parents Wilbur and Anne Pittz, his sister Agnes and Bill Meyers, sister-in-law Joanne Pittz and brother-in-law Hal Ruth. While his passing leaves a huge void in our hearts, they are also filled with wonderful memories and laughter. Rest in peace Dad, you got us last! A funeral mass will be held 10:30 A.M. Thursday January 30, 2020 at St. Thomas Aquinas Catholic Church in Freeport. Visitation will be from 3-7:00 P.M Wednesday at Burke-Tubbs Funeral Home in Freeport, with a scripture service beginning at 3:00. there will also be a visitation Thursday from 9:30 A.M. until the time of service at the church. Entombment will take place at Oakland Mausoleum. In lieu of flowers a memorial has been established in William's memory.

The family of William "Bill" J. Pittz created this Life Tributes page to make it easy to share your memories.

Send flowers to the Pittz family.