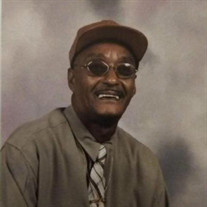 In loving memory of William H. Ford Sr. II Sunrise: June 17, 1943 Sunset: October 6, 2021 William H. Ford Sr. II, 78, of Freeport, IL passed away Wednesday October 6, 2021 at Pearl Pavilion in Freeport. He was born June 17, 1943 in Lula, MS the son of William H. Ford Sr. and Willie B. Smith. He confessed in Christ at an early age in Hayti, MO. William attended Central High School and later got his degree in welding. He then moved his family to Freeport, IL and worked at Honeywell until he retired. After years later his mother became ill and he moved back to Hayti, MO to care for her. After her passing he moved back up to Freeport, IL to be closer to his children. Years later he passed away from a long-term illness. He was a member of the Masonic Masons Lodge of Prince Hall. Surviving William is his three sons William H. Ford Jr. III of Madison, WI and Ronald Ford of Jonesboro, AR, and Steven (Louis) Mason of Elkhart, IN; daughter Yolanda Ford of Freeport; sister Bobbie (Bennie) Conner of Cape Girardeau, MO; mother to his children Annie Ruffin-Ford of Cape Girardeau, MO; close family friends Loretta Covington of Hayti, MO and Amanda Morhardt of Freeport, IL; nieces and nephews Natosha Pearson of St. Charles, MO, Craig (Latonja) Pearson of Cape Girardeau, MO, Edjron Pearson of Madison, WI, Lateay Miles of Hayti, MO, and Marcus Turks of Cape Girardeau, MO; and a host of grandchildren and great-grandchildren. William is preceded in death by his parents William H. Ford Sr. and Willie B. Smith, daughter Trina Ford, and sister Deborah Miles. Private family graveside services will be held Friday October 15, 2021 at Freeport City Cemetery. Covid restrictions and masks mandates will be enforced. Burial will be in Freeport City Cemetery. A memorial has been established in William’s memory.

The family of William H. Ford Sr. II created this Life Tributes page to make it easy to share your memories.